No civilization has survived accepting homosexuality. 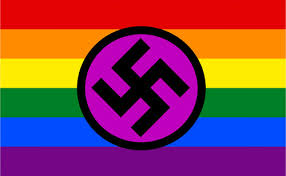 Any public person, group, company or church that identifies as Christian will be forced to take a stand on the question of whether or not they celebrate the LGBTQ lifestyle regardless of whether they want to or not, even if they barely care about the issue.  That’s the plan.  Because the Bible presents a clear position that is counter to the prevailing culture, it is an easy avenue of attack.  The hate on this issue is one-sided.  Christian theology teaches to love the sinner while hating the sin.  Anti-Christian leftists practice hating the Christian while celebrating the sin.  Christian unwillingness to celebrate the sin is the offense that cannot be overlooked.

Source: The Democratic Cold War on Christianity Heating Up

There is a reason homosexual acts have disgusted people throughout the world from time immemorial. It is the same reason we find the smell of sewage and rotting corpses repulsive. Revulsion protects us from disease.

People have known throughout history that some people for whatever reason have an attraction to the same sex, women who have such an attraction are called “lesbians” People, even those who disapprove of this preference understand that these lesbians prefer the sexual company of other women. but liberal say that if a man declares himself a woman and a lesbian that any lesbian who reject them is a bigot.

The Left started this race war. They degrade citizenship. They trash Americans. They shoot at GOP congressmen and target pro-life high schoolers and chase people out of public spaces. They make the dangerous Nazi comparisons. They jeopardize our security and tranquility

Source: Thread by @julie_kelly2: “Since Election Night, I’ve been called a racist, a moron, an idiot, a traitor to my gender, and un-American. I’ve been accused of supporting […]”

Every totalitarian system has used the tactic of coercing people to affirm the regime’s agenda, even when they disagree.  Forcing people to mouth politically correct dogmas that they know are false is designed to break their spirit and their resistance.  Aleksandr Solzhenitsyn said the worst aspect of Communist totalitarianism was not the economic poverty or the lack of political rights; it was being forced to repeat the regime’s lies: “The simple step of a courageous individual is not to take part in the lie.”

There is no evil that Democrats won’t support and force upon us.

Source: The So-Called Equality Act: Making Some Americans More Equal than Others

The term “gay rights” is an example of controlling thought through language. The phrase refers to formal approval of homosexual practices as well as special privileges for gays, who supposedly have a “right” to hiring priority, immunity from criticism, and all the other bennies that come of being “oppressed.”